In Mahou Shoujo of the End there are two types of Magical Girls:

Blood of the Witch

The daughters of Demon and a human are the Witches, and the daughters of a Witch and a human are the Magical Girls. The Magical Girls with the Blood of the Witch (魔女の血族の魔法少女, Majo no ketsuzoku no mahō shōjo?) will always be born women, since in case of being born men their bodies would be taken by the Devil. They have an individual magic that "wakes up" with time for different events. With the Magic Girls of 13 generations you can do a ritual called Catastrophe of the End.

They are only born when there are sexual relations between the parents, since as Wataru Himeji says in Chapter 43, by artificial insemination a Subspecies of Magical Girl would be born, which does not serve for the ritual.

The Subspecies of Magical Girls (亜種魔法少女, Ashu mahō shōjo?) are created with the DNA of a true Magical Girl and that of a human. They invaded Tokyo and their main objective is to kill humans to comply with the Plan Magical Girls of the End.

Their weak points are their Canes, with which they can infect humans. Their Canes have different abilities and appearances according to the Magical Girl, which can be used by humans.

Modified versions of the Magical Girl Sub-Species are created by Yuji Tonogaya. They have intelligence and can speak in a normal way, plus they can move on to their "improved" form without Living Dead M. 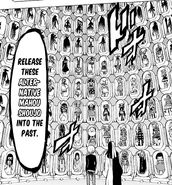 Retrieved from "https://mahou-shoujo-of-the-end.fandom.com/wiki/Magical_Girls?oldid=6231"
Community content is available under CC-BY-SA unless otherwise noted.